This is not a manifesto, it is a confession.

Not a big statement, only a shared thought.

This is not a typical exhibition but a series of subversive encounters between a creative team and a creative person.

We meet in order to take a break from the daily grind and re-evaluate the everyday.

In order to reinvent.

In order to play.

DIONISIOS PAPPAS: MOST RAYS OF LIGHT

Since white is the color that reflects the most rays of light,and thus is most easily perceived, a beautiful body will be all the more beautiful the whiter it is.

The seminal book History of the Art of Antiquity (1764) by Johann Joachim Winckelmann, marked a radical shift in the Western world's perception on ancient Greek art. Its glorification of Classical antiquity sparked off Neoclassicism and irrevocably redefined our conception of our past. Disregarding the fact that ancient Greek and Roman sculptures were originally painted with bright colors, Winckelmann argued that white marble represents the unblemished beauty and absolute truth, influencing a great number of thinkers. From his book, a very controversial phrase is often requoted: "Since white is the color that reflects the most rays of light, and thus is most easily perceived, a beautiful body will be all the more beautiful the whiter it is".

Dionisios Pappas, with a background in archaeology, often draws images and symbols of classical sculptures in order to challenge modern preconceptions about identity, single principles and centralized ideals that are deeply rooted in our understanding of Ηistory and, by consequence, our view of ourselves and others. Intentionally using paper in his work, he makes a case for a fragile and shattered view of the material body and the self. Familiar images of a glorious past become the ephemeral, dark ruins of today. Pappas’ sculpture Venus (2017) is made from multiple pictures of the face of the Greek Goddess. He decisively opens holes in the face, disturbing its beauty and allowing the viewer to look through and beyond the multi-layered image. As if an image must be pierced in order to reveal a deeper meaning.

In his series Dolls (2017), the artist moves away from archaeological references to use dissected vintage children's dolls as his canvas. In search of a new skin, he overlays them with photocopies of himself to cover the plastic flesh. Through these inky effigies, a new, intimate identity is restored. Another tender artwork linked to childhood is Portrait I (2015), inspired by a photo of the artist’s mother. The image of the face is shaped through multiple layers of the same folded photo, giving the impression of a vibrating liquid surface when a pebble drops in water. In Head A / Head B (2018), the artist creates disproportioned replicas of his head that look like a nightmarish snapshot of himself, as perceived by others. An idea that penetrates his large-scale pencil drawings Head I / Head II (2017), immersed in darkness. Their features are blurred, and they look back at us like a transmuted image of ourselves.

In the 18th century, Winckelmann used a causal explanation to prove the superior aesthetic purity of a material over another (and of a civilisation over another) based on its property to reflect "the most" rays of light. Today, Dionisios Pappas, a modern offspring of the "white marble ideal", caught between an idealised past and a globalised present in decay, tries to subvert any absolute or dominant belief. Instead, he suggests a prismatic perspective of the world and a decentered, diversified view of things and of oneself. Truly, what the world needs is more rays of light. More and more.

Dionisios Pappas (1974) was born in Athens and, throughout his school years, he frequented the Art Studio of Dimitris Mytaras in Chalkida. It is where he first developed a flair for art. Years later, his long studies in archaeology and Byzantine archaeology will find their way into his work as an artist. His works with paper because "paper, part of our everyday life, is the canvas of the first children's drawings; due to its vulnerability, the fragility is interwoven with the temporary". For Pappas, ugliness is seen in people's aggression which he has experienced himself. He is a savvy collector of kitsch lighters that he used when he was a smoker. A childhood memory he recalls is the smell of a sandlot friend. Many years later, when he ran into the same smell again, he immediately remembered the original.

"Dionisios Pappas: Most Rays of Light" is a monographic exhibition, part of THE DECEMBERISTS Subversive Encounters, organized by SAINT OF ATHENS with guest curator Eleni Tranouli. 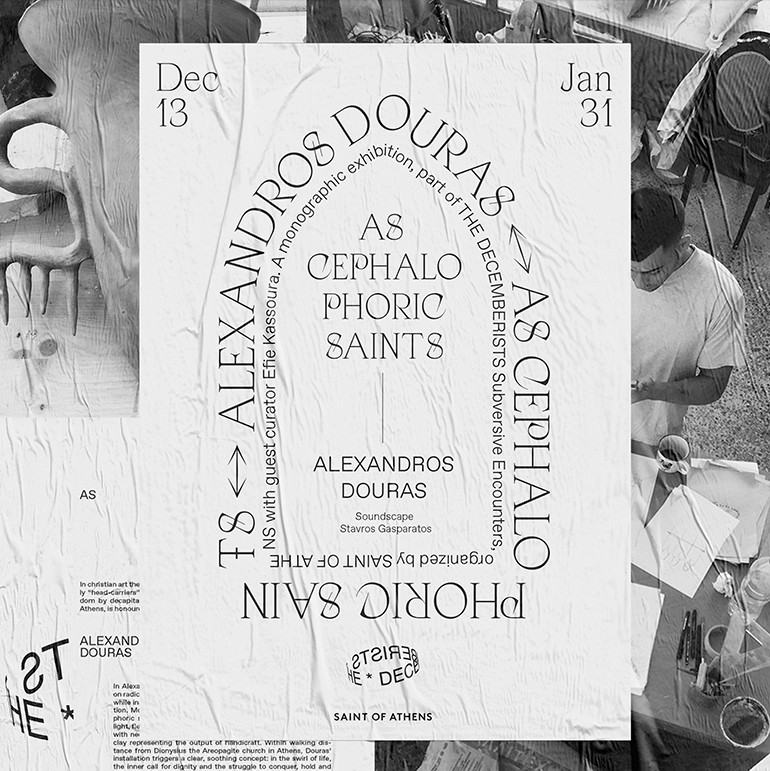 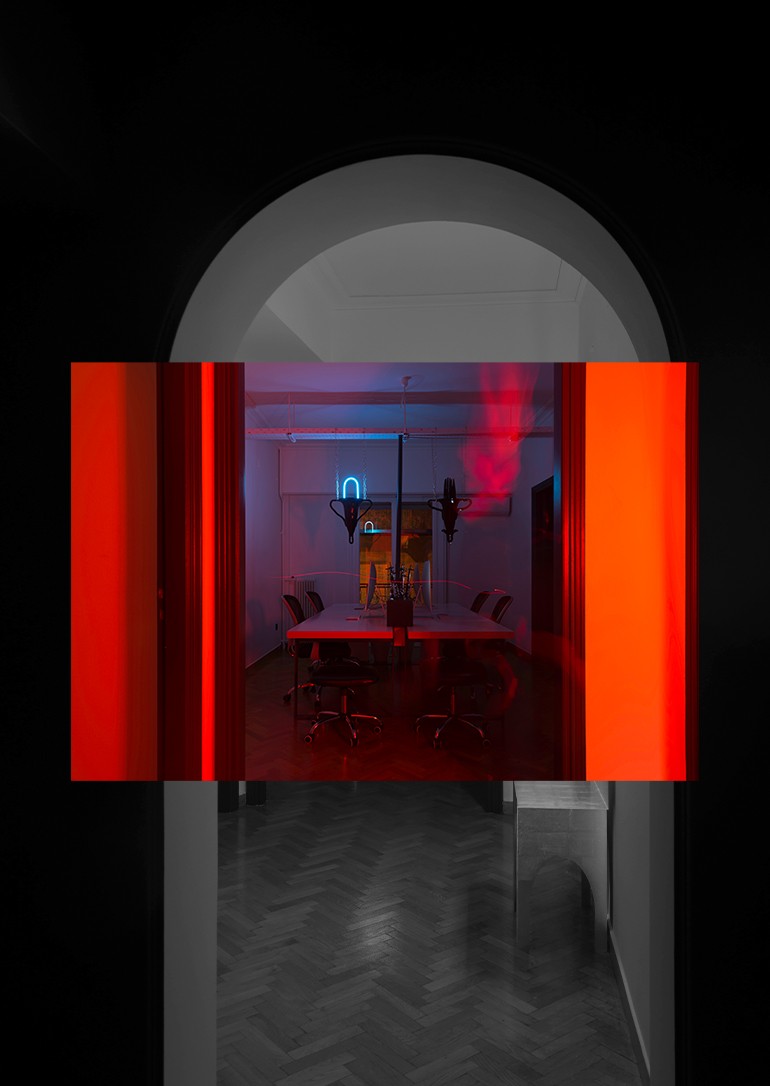 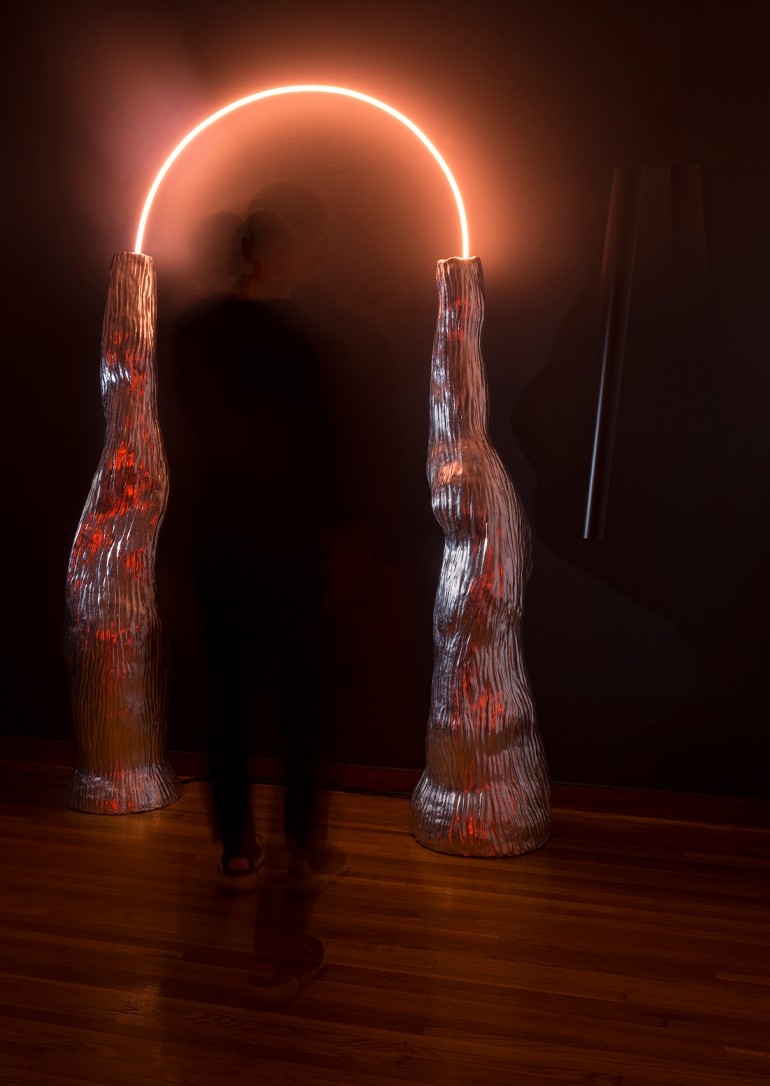 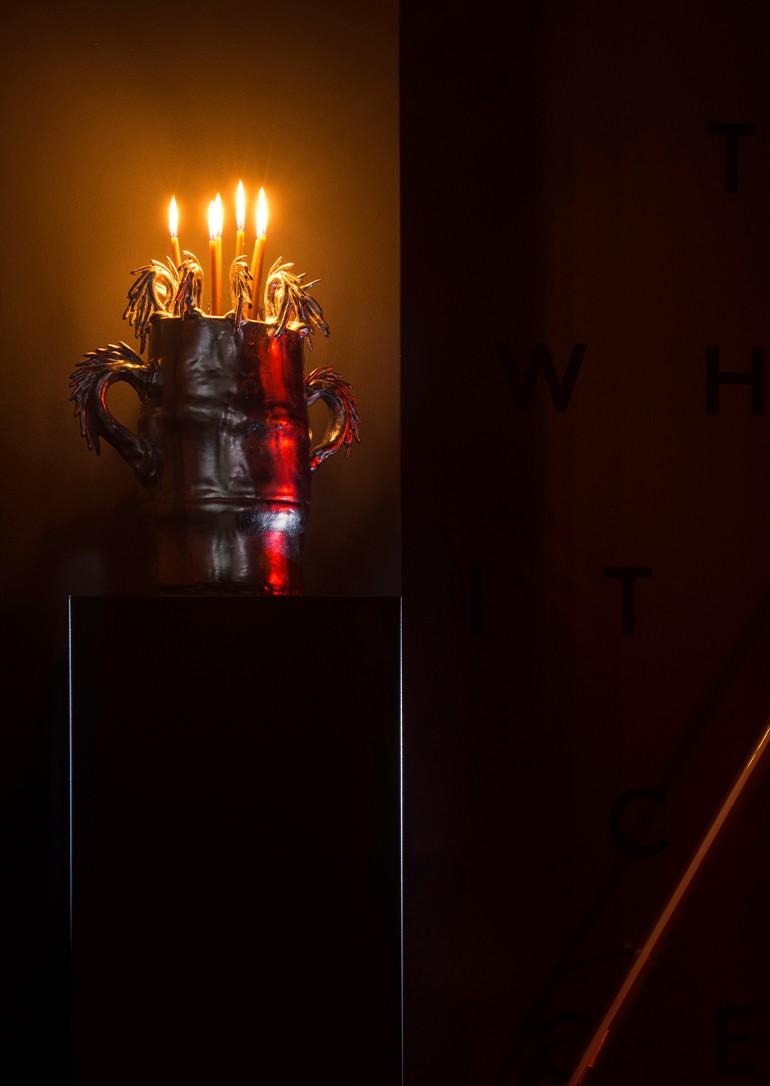 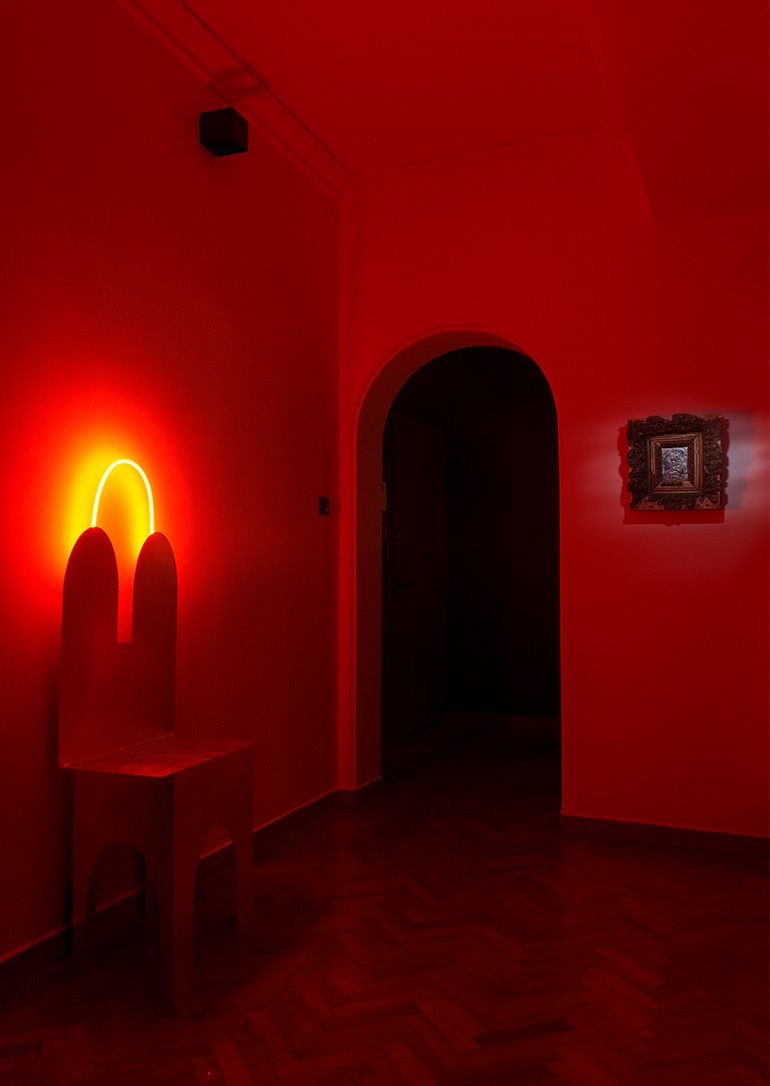 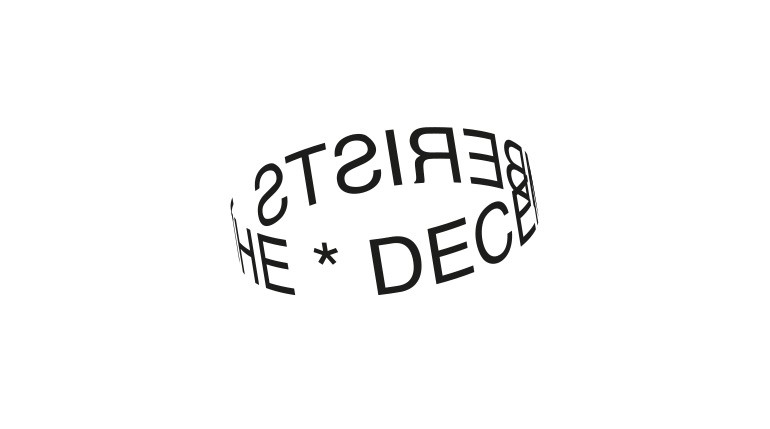 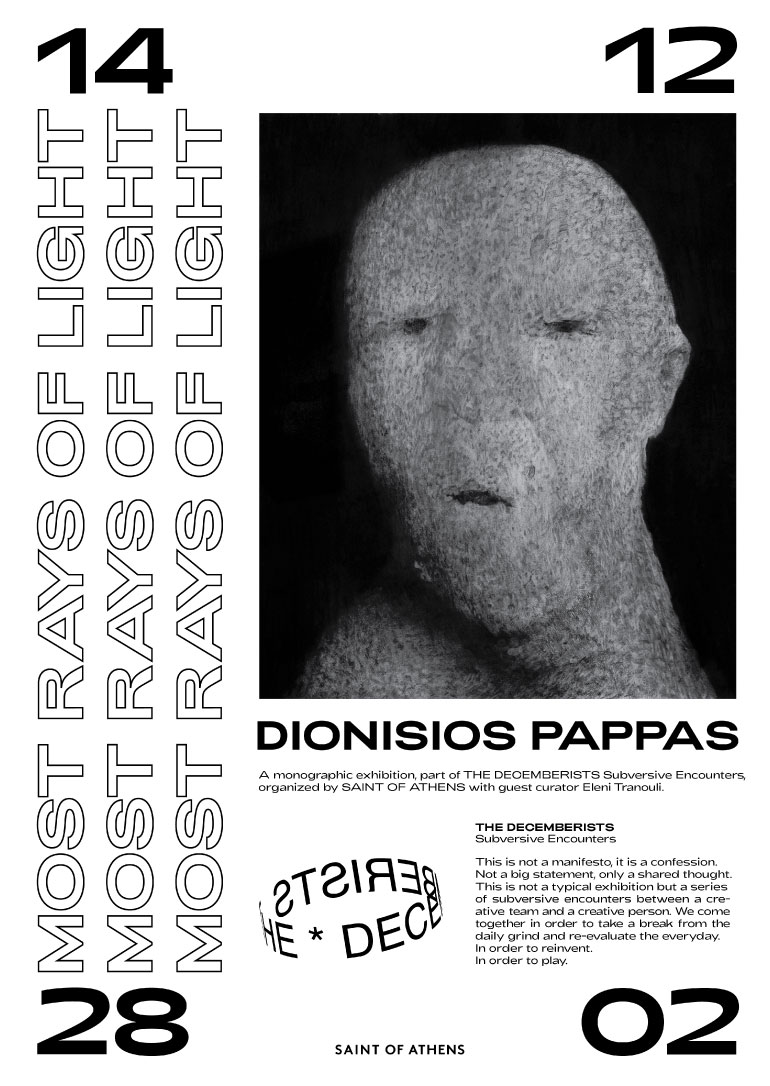